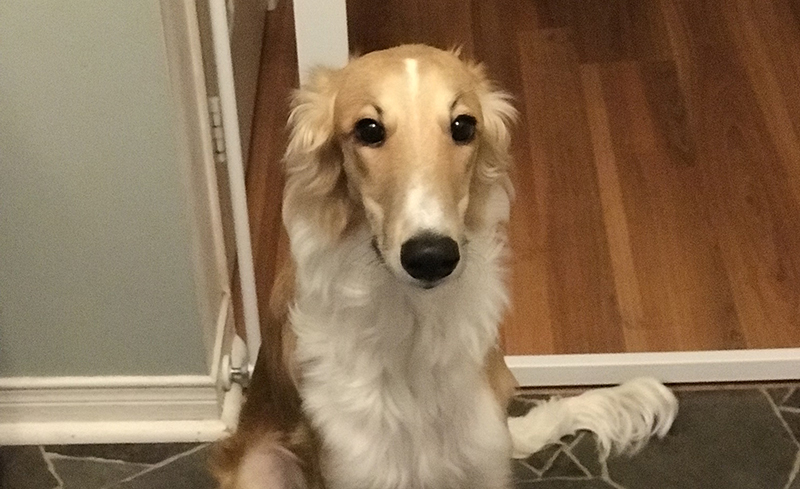 Minett is the puppy we kept from our breeding in 2017 between "Ranger" and "Willow".  Minett is a lovely, silly girl with her mother's gentle nature and her father's happy personality.  Minett made her debut in the show ring at the age of 18 weeks and immediately rewarded our faith in her by winning Best Novice Puppy in the Canadian Silken Windhound Booster show.  After spending the winter months growing, she was recently back in the show ring again at the end of April 2018, where she won the Puppy class and began accumulating the points towards her UKC Championship.  Look for her in the ring again soon.

Minett has continued to do consistently well in the show ring. In early June of 2018, at the age of 11 months, Minett went to UKC Premier, where on the first day she earned Winners Bitch in the largest breed entry at the show.  She placed second on the second day and rounded out the weekend in a big class of Silkens by taking Winners Bitch and then Best of Winners, which completed her UKC Champion title.  At the end of 2018 she earned the first two of the five legs towards her UKC Grand Champion title.  In one weekend of showing in 2019, Minett completed the other three wins needed to earn her UKC Grand Champion title at just over two years of age.

Minett has also branched out into other activities. In 2019 she earned her CGN title and her Novice Trick Dog title.  She has also spent time on set as an animal actor, an activity we look forward to doing more of in the future.

Click Here For More Photos Of Minett
Please allow a few moments for the gallery to load.